The 'Groepsfoto' in 1634: Johannes Claeissens's 'Christ in the House of Mary and Martha' as a unique group portrait of the community of sisters and brothers of the Mary Magdalene hospital in Bruges.

During every trip, dinner, excursion, congress, study day or other group meeting it is a standard procedure today: posing for the group photo. Participants are asked to take their place for the photo, where under the supervision of the photographer some are asked to sit, others to stand, to record the special meeting of people for posterity in the most beautiful and lively composition. And because the photo must of course be cheerful, such a session is accompanied by the necessary joking (see image).

In the case of Johannes Claeissens's painting of 'Christ in the House of Mary and Martha', that because of the figures above the heads of the figures a group portrait had to be, the necessary historical data about the persons portrayed were found to be behind a bar on the stretcher's frame. This bar turned out to be part of the original muscle frame (see image). All the names of the nominees were described, including their ages: left in yellow Charles (Sarel) d'Hulstere (1607-1655) 28 years old, with pewter in his hand. To the right of Christ as the Holy Martha Tanneke (Janneke) d'Herts, 39 years old, and next to her on the chair as the Holy Mary Maeijken (Mayken) Waterlo [e / o] p († 1652), at the age of 30. On the right in the kitchen area are the 40-year-old sister Amelberghe van Steene († 1655), while she is cleaning fish, while the 31-year-old Adriaeneken Dhaeck (d'Hurck) († 1646) puts a fish on the whim. Behind her, the 28-year-old Maeijken (Mayken) Valcke († 1652) washes the dishes, while on her left the 37-year-old brother Nicolas (Niclaeys) van Hulendonc († 1647) grinds ingredients in a mortar. Finally, the 75-year-old Laureijns (Laureyns) Carpentier († 1643) stands by the fireplace. 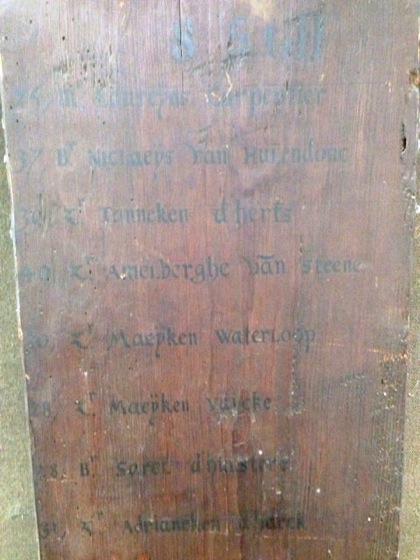 Further archival research confirmed that these persons formed in 1634/5 the community of brothers and sisters of the Mary Magdalene hospital in Bruges. They are all mentioned with name and by name in the cash books of the hospital. The same cash books also mention that Laureyn's Carpentier was the superior of the hospital in the years 1634/5.

This Mary Magdalene hospital (see image) was one of the four most important alms homes in Bruges during the Middle Ages. Its existence came to an end in 1796/7, when under the French regime all monasteries and spiritual institutions were dissolved. Claeissens's painting must have become adrift from that moment on. It only came up again when it was offered for auction at Christie's in London from the collection of Captain Rimington in Cumberland in 1936. Shortly after that auction, it came into Dutch private ownership. One of the former owners was able to tell how, after purchasing the painting, he took it home with his mother in the tram in Rotterdam. The painting has recently returned to Belgium, not entirely at the place where it was created, but very close.