What is there to get excited about in a copy, besides spotting a few differences from the prototype? Surely what counts is the original?

On these grounds generations of art historians have failed to do justice to the copy because they were unwilling to accept that copies can be highly interesting in themselves, both from an art-historical and a historical point of view. After all, it was Leonardo da Vinci himself who advised painters in the early 16th century to copy as much as they could in order to pick up earlier styles! What follows here is the story of an intriguing copy which, once restored with endless patience by Annetje Boersma and Joanneke Verhagen, turned out to have an exciting history.

The story begins when the painting turned up with an Amsterdam art dealer a few years ago. It was snapped up in a coup de foudre by a private collector, who took it home and then wondered: What do I do with it? To whom should I show it? He bought books, studied Rubens’s paintings, travelled to Madrid and London to see works in the collections there at first hand, and eventually asked an expert to look at the painting. He was promptly told it was nothing special.

The owner contacted me and asked if I would be willing to take a look and advise him. Taking a look proved to be more difficult than expected as the painting was in poor condition with layers of dirt covering the surface. Indeed, I found myself wondering whether the matter would be worth pursuing. What if it turned out to be a dead horse…?

And yet there was ‘something’ about the canvas that made me want to go on. Firstly its size, which undeniably gave it an imposing quality. And secondly a strong sense that it dated from the 17th century. I decided to take the matter in hand and asked the Rotterdam conservator Annetje Boersma, who recently treated the Achilles series at the Boijmans van Beuningen Museum, whether she could take a few samples.

The result of Annetje’s investigations sent the owner into raptures. It was going to be fabulous, he proclaimed! His enthusiasm was infectious but there were still plenty of hurdles ahead of us. Surely, we needed a feasibility report. What if it was a dead horse after all? Annetje insisted that a project of this scale required careful preparation and planning. After lengthy discussions Annetje was prepared to come on board and the process of removing layer after layer of grimy old varnish could begin.

The results were astounding, as can be seen from the photographs here: the colours regained their original brightness, and previously lost nuances became visible again. The conservation treatment also revealed important technical information, notably that the ground layer contained the characteristic lead-white pigment originating from Rubens’s workshop. 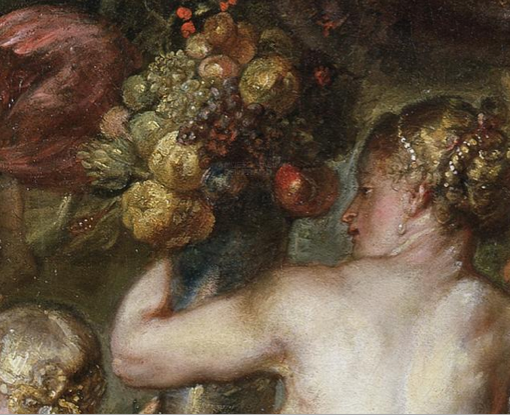 What else did we find out? First of all that the painting is an exact copy of a work by Rubens, now in the Prado, Madrid. This work is mentioned in the artist’s inventory at the time of his death, and was sold in 1640 to King Philip IV of Spain, who had commissioned approximately 20 canvases of the same type as our copy.

An important point about this late series is that it shows Rubens trying to emulate Titian. Both the style and scale of these works are reminiscent of the Venetian master. Rubens’s brushstrokes are loose and fluent and there is a distinctly Titianesque interest in naked flesh. Rubens worked tirelessly on these scenes, mostly subjects from Ovid’s Metamorphoses, but sadly failed to finish them before his death. This raises the question whether the copy was made at the time of, or possibly immediately after the artist’s death, since we know that the original was due to travel to Spain shortly afterwards. In that case, who could have painted it?

Browsing through the RKD’s database of images, I came across Jacob Jordaens as the author of the painting at the time of its sale by the Berlin auctioneer Rudolf Lepke in 1913. Unfortunately, as Dr Joost Vander Auwera communicated to me (verbally), this attribution has been rejected on stylistic grounds. Interestingly, the 1913 catalogue also claimed that the painting came from the collection of the Spanish Infante Don Sebastián Gabriel de Borbón (1811-1875). Between 1830 and 1850 this member of the Borbón family must have collected some hundred paintings by Flemish, Dutch, Spanish and Italian masters. Sadly, no proper inventory is known of the collection, but it seems clear that the Rubens copy discussed here was sold at an auction at the American Art Galleries in 1889.

The current owner in Amsterdam now enjoys the painting in the happy knowledge that by acquiring the work he is following in the footsteps of Don Sebastian.